Whether you're a foodie with a passion for truffles, or a food voyager with a curiosity about one of the most exclusive foods in the world, the Napa Truffle Festival has something for you with programs that offer an opportunity to experience, explore and learn firsthand from experts about the gastronomy, science, history, mystery, and hunting and harvesting of the highly prized Périgord black truffle. History of the Festival

The Napa Truffle Festival began in 2010 as American Truffle Company®’s (ATC) vision to bring the European black truffle to the tables of America. Few places on earth conjure the spirit of global elegance and hospitality like Napa, one of the most influential food and wine meccas in the world – the perfect setting for the Festival. Combining world-class cuisine with cutting-edge science, the Festival has had the privilege of working with top star chefs from around the world to showcase truffle cuisine, alongside truffle scientists and experts recognized for their knowledge and data and who have pioneered the scientific cultivation of European truffles in America.

From the beginning, the Festival has pursued the highest culinary standards, featuring a Michelin star/master team of celebrity chefs from across North America and Europe. The Festival’s own Michelin starred host chef Ken Frank remains the first, and so far the only, American chef invited to participate in the Fiera Internazionale Tartufo Bianco D’Alba, the world-renowned Annual White Truffle Festival in Alba, Italy. He also received the distinction of being knighted by the Order of the Knights of the Truffles & Wines of Alba. 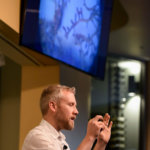 Education has been an important part of the mission of the Festival. On the one hand, the Festival features seminars on the fundamentals of scientific truffle cultivation and truffle dog training, benefitting many prospective truffle growers. On the other hand, the Festival has evolved to offer foodie-centric programs where guests can learn firsthand about buying, storing and cooking with truffles directly from top Michelin star chefs. Elevating the foodie’s educational component are immersive, experiential programs that encompass the sight, smell and taste of various species of truffles and “truffle products.” While the Festival celebrates the fine world of truffles, we are also committed to giving back to the community. Since its inception, the Festival has donated a portion of the proceeds to the local food bank at Community Action of Napa Valley, and supported various fund-raising efforts in the San Francisco Bay Area. To broaden the community’s access to truffles, the Festival also presents a free Marketplace event that offers the general public an opportunity to see live cooking demos, meet the truffle dogs and purchase truffle dishes à la carte directly from the merchants at the Oxbow Public Market in Napa.

Find Out More About Fresh Truffle Availability Throughout The Year